The other day jmac and I were chatting and he raised the opinion that the software-industry was a terrible tag and he makes some good points.

Why do we have an industry specific tag in the first place, I thought they were bad? Well the software-industry tag is wildly popular at least partially because the majority of Stack Exchange users know about SE because of stackoverflow[citation-needed]. Additionally as a software developer myself, I like to think there are a number of unique issue we face such as listing our skills on a resume, frequently having to learn on the job because the industry changes frequently, etc... Until I realized I use to face exactly those issues when I was lifeguard. What I am saying is all industries have unique issues; I don't even think there are more unique issues as a developer compared to other industries. Just because there is a lot of software related questions it doesn't make it okay for them to have an industry specific tag (for all you fellow programmers, just because everyone around you is using floats as their iterator in a for loop, doesn't mean you should).

Additionally the work environments of software developers vary wildly between companies; compare a company which still run a 9-5, waterfall based development shop to companies like Valve which have 100% time (like google's 20% time, but you just work on whatever you want always). The point is, just because we both program does not mean that we face the same problems or the solutions that we face will be the same.

Jmac also raised the point that it is unlikely that we can just burn the tag once and for all since people will just keep creating new tags... 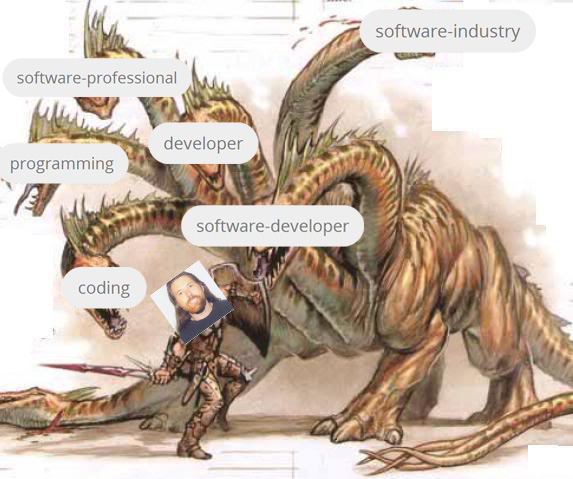 or if you prefer some 7 year old Ian art (thank jmac for this one): 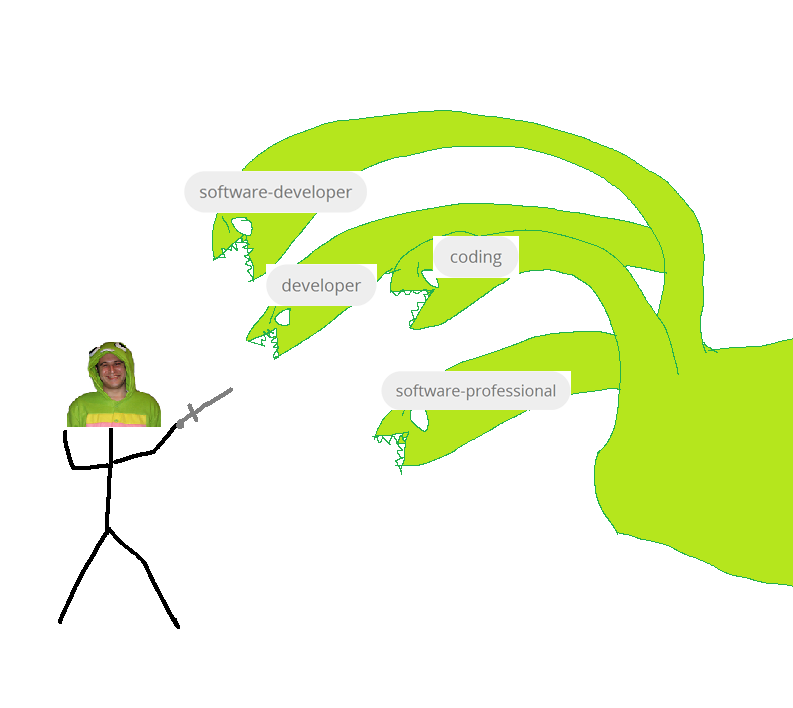 Weigh in! Should we be tempting fate by adding more programming tags? Changing the software-industry tag? Giving poor jmac/mods a bigger sword to try and fight the programming hydra?

My first thoughts on the topic is that the rep needed for adding tags is too low. The 'Hydra' problem, from the perspective of a new user still learning the ropes of TWP.

As I see it, the active members are very concerned with making sure good answers get the votes they deserve. That being the case, I pulled quite a bit of my rep from around three answers. I'm nowhere near familiar enough with the community and and how TWP operates to create a tag or a less than obvious synonym. Even with my recently acquired review rep, I'm still timid to use it while I get a feel the community's expectations. Juxtaposed with main SE, I've had to work for the bit of rep I have. It's not heavily modded and sometimes feels like a free for all. I've been there for years, and have put down quite a few questions and answers and my TWP score is almost the same.

TL,DR - Quick accumulation of tag privs is a function of the community being engaged, potentially to the detriment of organization.

If it's helpful, I'm working on a query to show the posts tagged software-industry that have at least four total tags so to see how much damage a burnination would do. I'm thinking we might be able to work on re-tagging ones under the line if they aren't too plentiful and hoping it wouldn't be missed on the rest. Not sure i'll get to it today though. 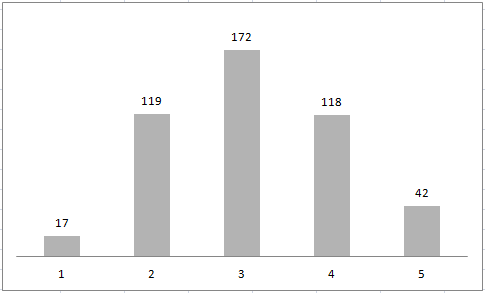 Metaception - the art here is magnificent.

After discussions in chat, burnination is too harsh.

To make this tag more useful, we should review all the questions tagged with software-industry, and retag them if they are not specific to this industry.

Given that we are currently at 495 tagged questions and don't want to flood the active list with old questions that we are fixing, we will have to limit how many questions we retag per day.

Monica has suggested an excellent method for decoupling the review from the retag, so that users without retag permissions can participate in the review, and we can perform bulk operations on the questions that need cleanup.

To me, tags are filter mechanisms that allow me to filter questions for ones that are most likely to interest me, or that I feel I would be uniquely qualified to answer.

This tag allows me to do just that, and I would be a sad panda to see it go away.

(As a side note, I fully support industry-specific tags providing there is something unique about the question/industry that makes it different from a general generic answer that would apply to every single industry)

There are 477 questions currently tagged 'software-industry'. A wholesale manual retagging is probably going to be unreasonably tough on the community (though if you think you can do it, I am all for that too).

Instead, I think we should just blacklist the tag, and when new tags pop up, we blacklist those too. We can do this wholesale, which would mean that we would just have to look for untagged questions afterwards and clean those up manually (which would be far less than 477).

We should get rid of the tag for all the reasons you explained in the question. It's not a good tag. We can always check for new tags when they are small, and make sure they are only baby hydras.