Is the puzzling icon too similar to ours?

Or is it just me?

Frankly it doesn't seem to be just me as, it was this comment, currently on 34 upvotes that prompted me to raise this on meta:

With the new site icon and the introduction to the post, I thought I'm on Workplace. – Tomáš Zato

It's nice to see that puzzling graduated and got its site design, but the favicon seems awfully similar and potentially confusing.

This issue is also being discussed on the Puzzling Meta:

Jon Ericson, community manager for SE, has responded on that discussion and also replied here.

I went with mostly blue shades for the site, with orange for an accent color. Blue symbolizes peace, calm and serenity, but also sensitivity and wisdom. On the other hand, orange warms up the overall tone.

For the logo, I’m using an origami icon for the “O” letter. As a logo mark, it stands out on its own and can be easily translated to other sizes, or for promotional materials for the site.

click on the image below to see the full resolution version 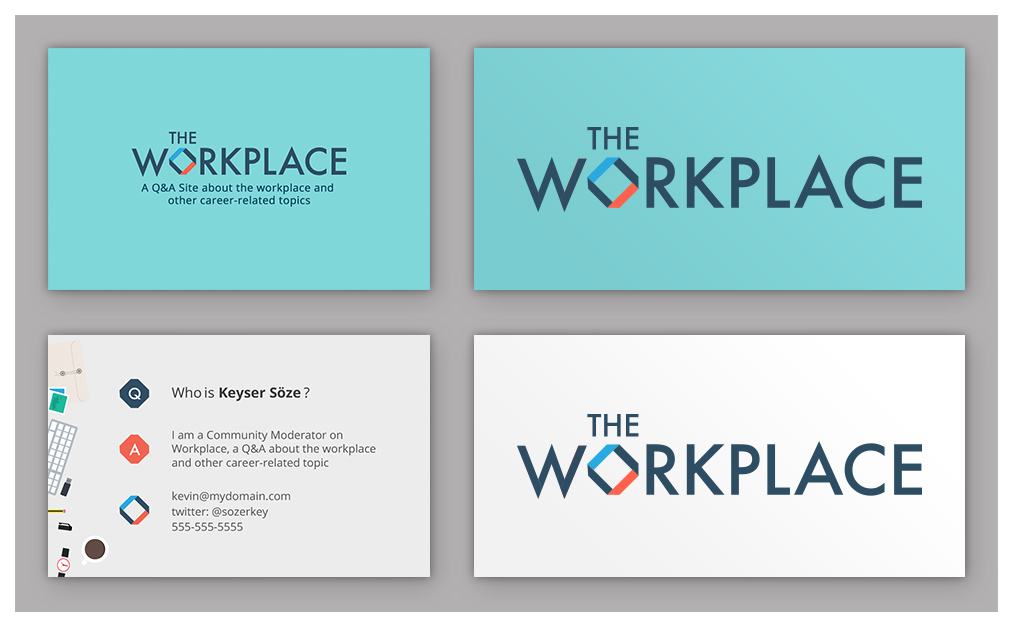 After going through the top questions of this site, it was time to find a strong icon which could stand on its own. To do so, I had to dig into the meaning of "Puzzling" and think about how we'd represent it with a shape. Two categories and ideas came out of this exercise:

I believe those 2 paths capture the overall themes of our "Puzzling" community, but it was hard to keep only one, so I decided to give it a try and create a unique shape using both:

Regarding the logo environment, I kept some of the same themes (discover and mystery) and came up with a pattern which conveys "a few clues within a thousand pieces of evidence" (the light pieces represent the clues).

I appreciate that you included the design pitches. They show the process focused on making the logo work for the individual sites:

At full size the two designs are clearly different. They share design sensibilities, which I think can be attributed to two things:

I talked to Stéphane yesterday to gather information to write an answer to a related question on Meta Puzzling. He's comfortable with both designs as is. However, I think the smallest logos are a bit too similar as favicons and on the Hot Network Question sidebar. The problem is not unique to this pair of logos, so I proposed a general solution for the sidebar: append the name of each site to the logo. From the feedback I've received so far, it sounds like that suggestion does not cover most (if any) of the concerns of The Workplace community.

Stack Exchange has always valued community input when it comes to site design. In fact, the original logos for Stack Overflow, Server Fault and Super User were designed by users. Even today, our professional designers solicit community feedback. As recently as the Emacs design you can see that they sometimes change the entire concept of the logo in response to community concerns.

The deeper issue seems to be that The Workplace community didn't follow the design process on Puzzling and only noticed the problem when the design had been finalized. Unfortunately, the way most people initially encounter new site logos is on the Hot Network Question list, which is a feature already disliked by many. So I definitely understand the frustration this community has had with the situation. It's not a pleasant surprise to click on a link that you thought might be some hot new question on your favorite site and land on a question intentionally designed to be cryptic. I would go so far as to call it clickbaity.

Again, fixing the sidebar to remove surprise solves only part of the problem. It does not address the deeper concern:

I think what bothers me (and probably others) most is that this design decision affects us at the Workplace, but we had no say in the matter. In the real world you obviously can't expect this, but we are a closed community with common oversight. We shouldn't all be involved in site-specific decisions, but I would expect those who approve such changes to consider how it may affect others in the greater SE community. I don't feel like that happened here. – David K

As a matter of fact, the similarity was noticed back when the logo was first revealed. If I had to characterize the feedback for the logo in particular, I'd call it "mixed". So the logo should have been changed, right? Not so fast. Every design pitch meets resistance because people have a picture in mind that is very likely different than the designer's. (From my experience as a user: I didn't much like the Christianity deisgn when I saw it. It's grown on me.) Part of the designer's job to have the courage of conviction to stick to their guns sometimes.

My thoughts can be summed up by this comment:

The case of the perfect Puzzling SE logo might be unsolvable. Many SE logos are already enigmatic and all of SE is built on the question mark. At sizes usually displayed, SE logos pretty much amount to shapes and shades -- check out the color-bordered diamond of workplace.stackexchange.com – humn

I can see an argument for building a "logo conflict" check into our process. That might even result in better, more distinct logos. But in this case, that hypothetical process would not have changed the end result.

Personally, I stand by the opinion that we were here first, so we are not the ones who need to change.

As enderland pointed out in the comments, there is already a discussion started at the Puzzling Meta, and I very much like the proposed solution.

I like our logo and design, and I don't see any reason for us to take the time and effort to change it. The Puzzling Site Design was just released, so I imagine they are still in the process of making changes and updates. We would have to start an entirely new re-design process. The only thing I could see the Workplace doing to resolve this issue is to have our mods talk to the Puzzling mods and encourage them to pick a new favicon.

Personally I don't have anny issue with them being similar, but I am colorblind and I think any blue-red Colorblind would agree that there is no difference.

Since this new favicon has gone live, I must have attempted to flag qeustions off Topic a couple of hundred times thinking I was on workplace, while I was actually on puzzling.

I am not really asking for Change since I can live with it, but if possible add this point to the list.

They only look superficially similar to me. I see no need to change ours anyway, but it wouldn't bother me if you guys decided to, it's just an icon. But I reckon let Puzzling deal with it, they're already discussing it.

Does that solve the problem? Is that in keeping with Puzzling's design?

(You might want to put a darker outline around that. Or not, I don't know -- you don't want me making decisions like that.)

This should be brought up over on Puzzling before proceeding, but since (a) the concern is coming from Workplace and (b) I'm not active on Puzzling, I'm mentioning it here.

Personally I don't think the issue should annoy us. I am the worst-sighted person in the office (biologically) and have no issue by confounding the icons. Also I perceive the difference between both icons (I don't understand the WP one but the other one seems like those impossible optical illusions).

Additionally, before having these icons most sites have default icons with white letters over blue backgrounds, and that didn't kill anyone.

What I think is that we should not take this matter so seriously... in this case.

Not the answer you're looking for? Browse other questions tagged discussion .

22
Do we want hats?
45
Site design for Workplace.se
14
This is becoming too engineering focused
5
Discouraging down and close votes because you don't like the question
5
Should we reach out to users on other StackExchange sites to diversify the content on The Workplace?
0
The answer author's disagreement is now enough to reject an edit? (an edit rejected after only 1 review)
8
The Workplace updated site theme is ready for testing!
4
How can we make the Workplace more welcoming to people in marginalized groups?