I was just doing some Reviews on the Fist Posts queue, and encountered this post: 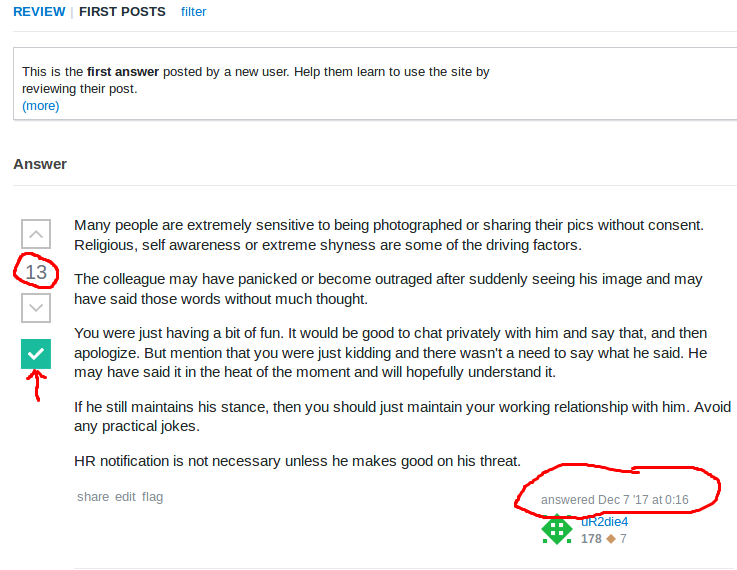 This I found really unusual, as this is a one month old answer, which is even accepted and has more than 10 upvotes. It is also closed.

I checked the First Posts history and of what I can see I was the only one to review it recently. Furthermore, exploring that history of reviews I can see that on the date of posting (12/7/17) user @scaaahu successfully reviewed it.

Any reasons why this post came again on the review queue? Could this be some malfunction or bug, or has someone experienced this before?

Questions are added to the queue when they qualify for it. Normally, a question qualifies as a "first post" when it is posted - but there are situations where this doesn't happen until later on:

That's what happened here. This user had two posts, both answers. The other one was on a question that was deleted today, taking its answers with it. That answer was previously reviewed as a first post (by you, in fact), but it seems that information doesn't get recorded with the user. Three minutes after the older question was deleted, the now-only post from this user entered review.

I agree it's peculiar. I suppose erring on the side of more review is better, particularly if a new user posts a bunch of stuff at once. There might be better ways to implement reviews, at the cost of code complexity and developer time, but I don't know if it's worth it.

Not the answer you're looking for? Browse other questions tagged support status-bydesign review-queue .

Welcome!
This site is for discussion about The Workplace Stack Exchange. You must have an account there to participate.
Help

2
Unupvoted answer
14
Cleaning Up Bad Answers on Popular Questions
4
Title in capital letters in the timeline and in review queues
4
How does the highlight indicating available Review Queue works?
4
Red dot on Suggested Edit review Queue
4
Is the "I'm Done" button on First Post Reviews broken?
3
I don't understand editing functionality - what am I missing?
10
What to do about reviewers who don't actually review?
16
Why am I unable to delete my answers, despite Stack Overflow rules allowing it?
5
Why did the system identify this question as spam?