Building a template for the potentially new "Ask a Question Wizard"

As mentioned by Monica in another Meta question, there's an Ask a Question Wizard Prototype in the works that looks a bit like this: 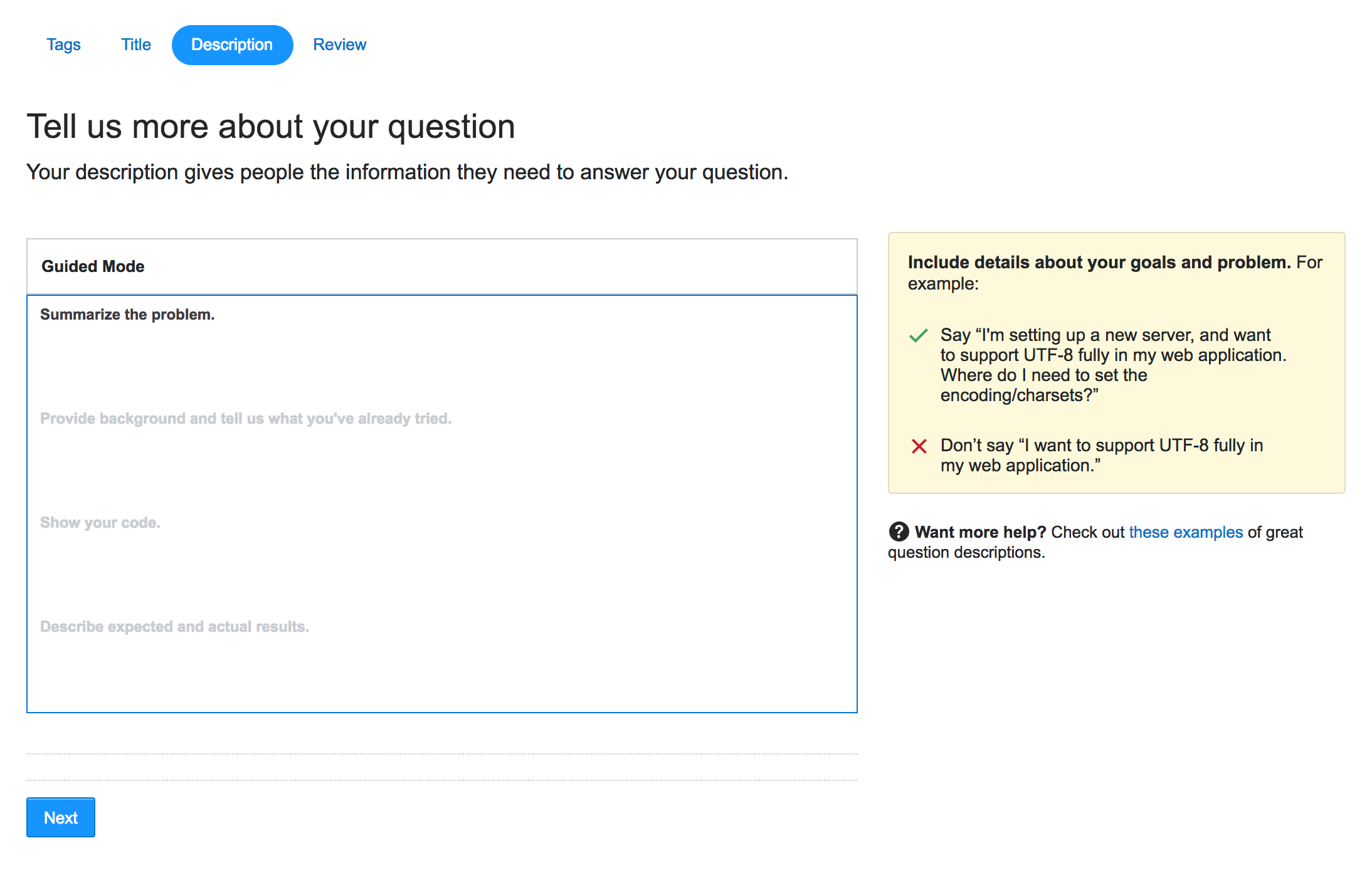 To support this, we'll need some kind of a template set of questions or points to cover.

In effect, we're wanting to guide people toward providing the necessary details into their question and lead them to being a little more structured in the way they ask. At the same time, we want to be welcoming and not scare people off by wordy workflow if at all possible.

Currently, the workflow is:

Each of these stages have yellow information blocks that helps guide the user toward the most appropriate level of detail.

Your comments here will be welcome

Can we add in something to ask for a location? So many of the questions asked here are massively dependent upon the asker's locale and so few actually add it in, at least on initial posting.

This looks like an excellent way to drive away new users from the site, especially non-native English users. Asking users to specify "tags" right off the bat might work for the Stack Overflow wizard because users generally have questions about a specific language/framework/technology, and the problem in terms of the expected code behaviour against the actual one is rather clear in their minds.

We are not Stack Overflow. Asking new users to "categorize" their question (into our rather messy tags) even before they have got a chance to "pen their thoughts" (if you will) is likely to be followed by getting confused and giving up.

Additionally, for non-native English users, interrogating them with more rounds of questions (and asking them to read more "information blocks") before they can even describe their actual problem would be making them jump through unnecessary hoops.

Moreover, what about mobile browsers? Many of our next billion million thousand users will probably come from the developing world, who usually join the internet bandwagon through smartphones. On the mobile browser, the so-called wizard presents the user with one question, one "Great!", and then takes them directly to the current page for asking questions. In other words, two additional steps that achieve nothing useful.screenshots below

We are not Stack Overflow. I would like to see this site being equally welcoming to everyone, regardless of their English proficiency or their ability to afford a laptop/desktop. So I am in favour of scrapping this wizard entirely at least until these issues are fixed.

Screenshots of the so-called Wizard on mobile browsers

11
Is Workplace going to follow the same life cycle as other SE sites for subjective questions?
6
Clarifying that this site's scope is a topic and not a community in the FAQ?
22
Do we want hats?
8
Can we add "Questions asking for advice" to the list of off-topic questions?
15
That time of year again -- hats!
11
Can we decrease the vertical height for each question in a list?
2
What should be our approach on new feature allowing removal of a question from HNQ?