What is going on with the up tick of deleting comments? To be specific, I am not talking about comments that should be deleted such as:

I am talking about comments where you are adding valuable input to the user, whom we are (at least I am) here to help, that doesn't directly answer the question.

Personally, I have been helped by many comments during my time here that did not directly answer my question by some of our highest ranking members. I simply don't get the need or desire to police useful comments so hard.

The site suffers because of it IMO.

There's been some increase in comment deletion, but there's context. 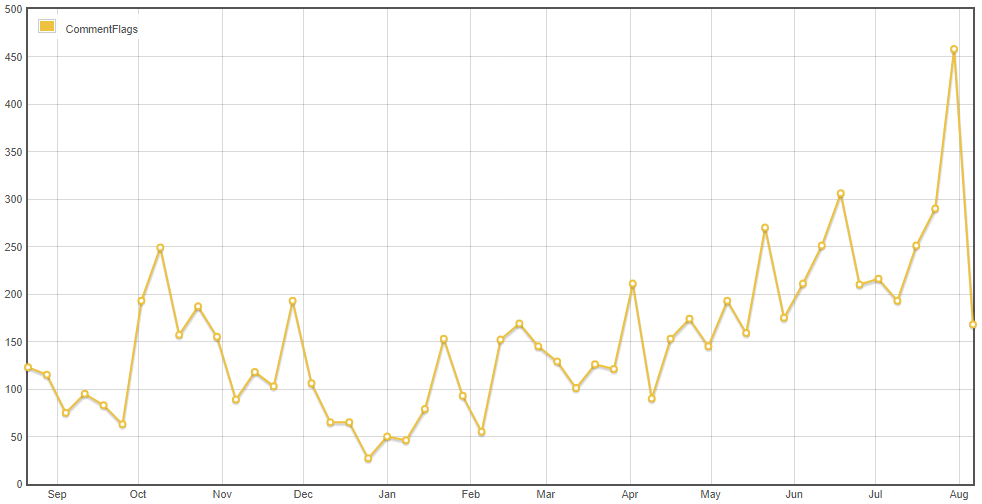 The shape of that curve isn't unique to The Workplace; it's similar on Stack Overflow, though of course the Y-axis values are different.

Are people flagging lots of old comments and that's why we have a problem? To answer that, here's the percentage of comments posted each week that got flagged: 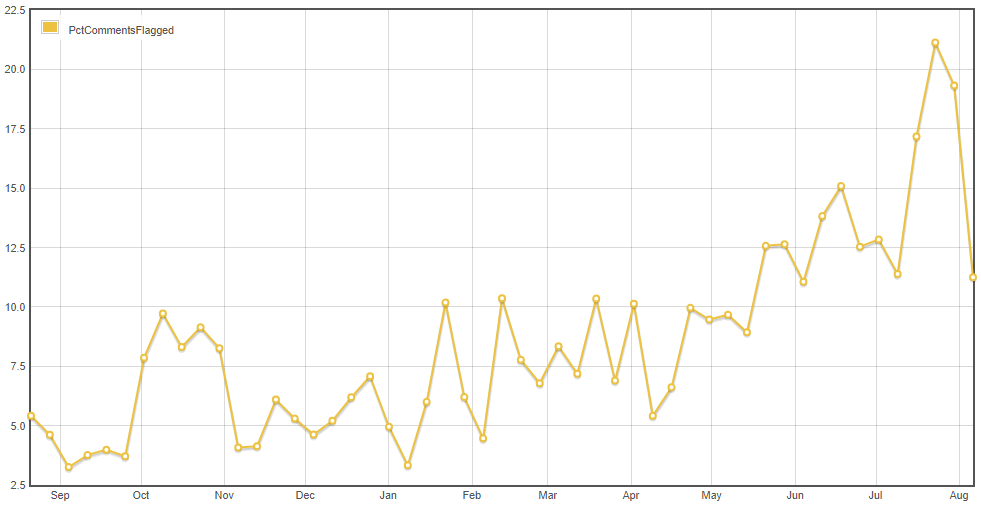 The shapes of those curves, especially recently, are very similar. That suggests to me that the flags are mostly on new comments. So either we're getting more flag-worthy comments or people are flagging more aggressively; either way, if moderators delete the comments, that means we felt the flags were warranted.

Even with more flags, though, moderators aren't purging tons of stuff. Other things have happened too:

In the last year, 72,761 comments have been posted here, with weekly totals mostly ranging between 1250 and 1750. 15,925 of those comments have been deleted, about 5600 of them by their authors (not moderators). 6409 comments were moved to chat and thus preserved (in 391 separate threads). Some of the comments moved to chat were not also deleted on the main site, so I have to get a little hand-wavy on that part, but at a rough guess, out of those ~73k comments, only around ~4k were actually purged. The largest flag reason by far was "no longer needed".

We get a lot of comments and a lot of flags on comments. We relocate a lot of discussions and about a third of the deletions are self-deletions. Moderators are outright nuking fewer comments than you seem to think we are, and the process is substantially driven by flags.

(Thanks to Shog9 for data-wrangling.)

It's pretty clear when you add a comment/suggestion what the intention is - asking for clarification or adding additional information. This isn't just for TWP, it's site-wide.

Therefore, we remove comments that:

The vast majority of comments deleted are ones that attempt to answer the question, or where people confuse the "add a suggestion" button with an instant messenger.

There is no one going around trying to police comments. Starting posts that way is confrontational and frankly not going to win you any points.

That being said, some more context, too - there are two primary ways moderators see comments to delete.

The first is direct flags on comments. The second is auto raised flags whenever a post has 20+ comments on it (you'd be surprised how often this happens).

There are currently 5 posts with active flags on the main site. Of these, 3/5 of the posts with flags on them have or at some point have had the "20+ comments flag" on them.

Speaking from personal experience I rarely would delete comments that I come across in normal browsing of the site without comments.

Never heard that one before.

Personally, I don't believe that deleting comments like "thanks, this answer helped me" or even comments with partial answers improves the site's "quality". Regardless, SE believes that comments are just noise, so there we go.

Fun Fact: Believe it or not, some users use "bots" to obtain a live feed of comments, so that they can flag them to reduce the "noise" by truckloads. Make of that what you will.

35
Experiment concluded: a comment by any other name
-2
Why was this comment – which suggested an improvement to my answer – deleted?
2
Why do “we” want to “fix” comments?

5
Are “Don't do…” Answers Appropriate?
7
2014 Moderator Election Q&A - Questionnaire
18
Time for the annual performance review!
17
What is wrong with comments?
0
What is the standard for mods stepping in and deleting posts?
4
When comments start okay and then diverge, can we just move the latter ones into discussion, while keeping the appropriate ones above?